Every morning to usher in the start of the School Day, every evening to close the school day. and every time the band requires assembly of its troops, the respective Bugle is sounded by a contingent of the band’s finest buglers, who enjoy certain privileges due to their elite status. Examples of the privileges include walking on the Starehe highways and being excused from parade.
Music 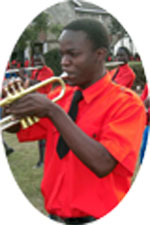 Starehe Boys’ Centre has a long and distinguished musical tradition. This has been evident in the many victories in the Kenya Music Festival held annually in the country. Success has been on both individual and School levels.

The school’s chapel seats 1,000 and has a large organ, one of two organs in the School (the other being in the Assembly Hall). The School Choir has made many achievements and has thereby earned an excellent reputation. Throughout the school’s history, many musically gifted pupils have excelled in private competitions and exams and made their mark in the musical society of Kenya. Some of them are members of the Nairobi Orchestra.

The school has many other smaller choirs and instrumental ensembles, along with the celebrated annual House Singing Competition called the “Interhouse Music Gala”, held on the last night of the first school term. The Music Department organises these concerts every year, providing an excellent performance opportunity for budding soloists and other musicians.

Starehe Boys' Centre and School runs a Centre, Secondary School and a tertiary Institute offering Accountancy and Computer studies. We are a truly an extraordinary place of learning. Our talented staff provides each student with a rigorous standards, high academic excellence and the best discipline on individual levels.

1. "Happy are those who dream dreams, and are ready to pay the price to make the dreams come true."

2. "To those whom much has been given, much is expected."

" Starehe Produces the best Crop of Leaders you can ever imagine working with. I have several managers here with me."

" Starehe is one of the schools I'd wish to visit over and over again. I always feel at home here."